Iridology is a method used in alternative medicine to detect imbalances by studying colors, marks and signs in the iris, pupil, and sclera of the eye. I would like to briefly describe this method, which I believe is the best method of the 21st century.

Have you ever noticed that there often appear clouds or marks in the iris of your yes and these often change depending on your state of health or age? Have you noticed that your left eye is different than your right eye? If you have, congratulations, as many people believe that their eye color remains the same all of their lives.

After studying many irises in great detail over many years, I have had the opportunity to notice these changes in the irises, pupils, and sclera of eyes and have come to the conclusion that what is revealed in the eyes, mirrors the state of health of our entire body. That is right, the iris of the eye is actually a map where each place represents a different body organ or system.

How did iridology start?

Iris analysis dates back hundreds of years, but the first iris map developed was in the early 1800’s by a doctor named Ignatz von Peszely in Hungary. He is known as the father of iridology. In his childhood it is written that he captured an injured owl in his backyard that had a broken leg. He noticed in one of its eyes that there was a black line but when the leg healed, a white mark appeared where the dark mark was.

This incident started a life-long interest and study of iridology. Since then, many scientists, doctors, and health professionals around the world have studied iridology. Iridology is taught in countries all over the world including America, Australia, Germany, and Russia, where even classical medicine has begun to take notice.

How can the iris of the eye reflect the condition of our body?

The eyes are connected by the nervous system to our brains. Many believe that the brain records information on every physical and psychological event that occurs in our bodies. If the eye is connected to this human computer we call the brain, it is reasonable to hypothesize that colors and marks in the eyes change in response to changes in our bodies. Through my studies I have confirmed these occurrences time and time again.

I have also discovered that most of the time there are only blue and brown eye colors. Most other colors such as hazel are usually signs in the eyes that point to various health questions. For example green eyes when photographed are actually blue eyes with yellow spots often indicating kidney, gallbladder or liver. Although there are some people today because of a mixed culture who have true hazel eyes. Many clients are surprised to find that their blue or brown eyes when photographed closely also contain other pigment colors or marks that normally are unable to be detected with just the human eye.

There are also what I describe as being several genetic iris constitutions, each with their own set of physical and psychological characteristics. Each person is born with one of these types of genetic iris constitutions and the information from them can reveal health questions that have occurred in childhood, and questions about health that will occur during adulthood and in old age. In this way, iridology is very useful for prevention of potential health issues. 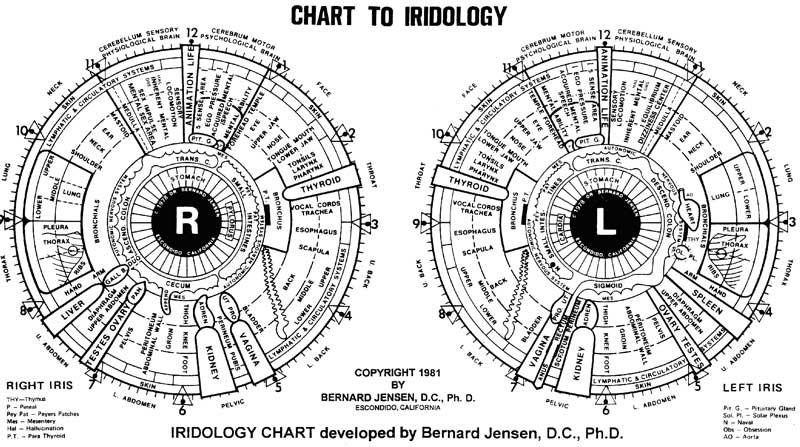 I often see clients who have visited so many doctors and gone through so many tests and still no one is able to make a solid determination. Through iridology I am able to consider the root of most problems and can view the body as a whole. Allopathic medicine has forgotten to view the body as being composed of interrelated systems, each dependent on the other and only look at treating symptoms

While classical medical tests like x-rays, blood tests, cat scans, etc, reveal certain conditions, they are often unable to detect chronic problems of where disease often begins. Iris analysis is a natural, painless, non-invasive method that assists the client in understanding their genetic dispositions as well as their strengths and weaknesses in their body. With their iridology results, they can learn to change some of their bad habits and make some lifestyle changes for the better.

What does an iridology examination consist of?

Clients who come for an iridology examination do not need to bring anything but their eyes. It does not matter if they are tired or unwell to go for an iris analysis. Photographs are taken by a special microscope camera system of both eyes, and a complex detailed analysis is made on every organ and system in the body. Recommendations are made on how they can improve their health status.

Iridology will also determine your genetic constitution and its strengths and weaknesses. Although it is possible to photograph even infants, it is recommended for children to be over the age of 3 in order that they can stay still for a few seconds to properly photograph the eyes. Genetic weaknesses can be seen even in infants and young children and this offers the opportunity for parents to have their children examined through iridology to prevent health problems in the future.

“Remember the eye is not only the window to the soul, it is also the map of the body”